First I apologize for the lack of pictures in this article. Belaying and taking pictures are not very compatible for a party of two climbers. Many backpackers visit New Zealand for its amazing nature. You will probably be one of them soon and think about bringing your climbing gear. To ease your plans, I transmit what I have seen during a month on north island sharing my time between carfairs and climbing. If you are use to the awesome cliffs of Spain or France, you could probably be disapointed by the routes here but there is some adventure to take during your drive to the South Island. Most of the different areas we have visited are 1h30 drive (west to north) from Taupo. 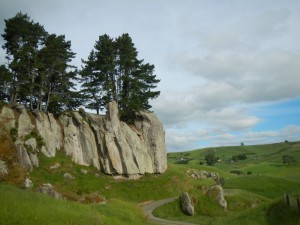 If you want to meat a real JAFA (Just Another Fucking Aucklander) you have to visit Wharepapa south and its main area, Froggat, a weekend. It could be the only moment you will meet climbers in north island so talk with them to get precious informations about the other areas! You will climb on a good pocketed volcanic rock on generaly 20m high routes. The landscape around is a typical sheep paradise: grassy hill, river and farm! If you are there for a quick trip, go straight to Main wall, Hold into your face and Bête noire wall. There is a big concentration of nice routes from 18 to 24 and routes are well bolted. It’s possible to camp for about 5 dollars in the background of the school. There are few facilities in Wharepapa south that is not a proper town but a junction. However, there is a climber cafe where you could have a look on many guidebooks (hard to find elsewhere) to schedule your trip. More informations and the guide book are available on freeclimb.co.nz

Thirty kilometers south of Froggat is Waipapa cliff, located beside Mangakino river and close of Waipapa dam. Approach take you 25 minutes. This cliff is wilder than Froggat and you may meet nobody there. The main cliff area and its differents walls ( The Arch, Wall of Fate, Gallaxy wall) are a good value. Rock is volcanic too and involved 30m technical routes. Some of them require to add cams or nuts without warning of the freeclimb.co.nz guidebook.There are few nice 18-22 routes but most of the obvious line are 23 and more. It’s possible to freecamp by the Mangakino Lake. This place is located on « Campermate » (an usefull app that you can upload on your mobile phone). 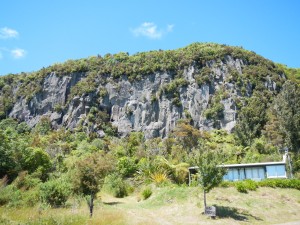 The plateau area in Whanganuy bay

On the west side of Taupo’s Lake is one of the nicest cliff of north island: Whanganuy Bay. This area is not described in freeclim.co.nz but you can find informations on the new and nice Rock Deluxe North Island guidebook. To access, you drive on a gravel road that become worst and worst when you approach the cliff. Without a 4WD and by saving your car, involved a 50 minutes walk. We climb in The Plateau that is not directly above the lake but not far. One more time, rock is volcanic and good, and routes can be high. You will find obvious lines on arete, crack or line of pockets between 21 and 29. A set of nut and cam is often used. There is a campground on the beach mentioned on the guidebook but it can not be reach without 4WD. Directly above the lake, further than The Plateau, we have heard about another nice area but I miss the name. 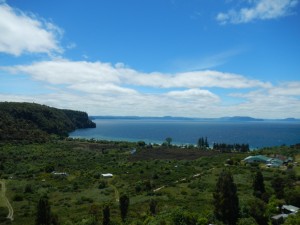 Others climbing areas seem to be interesting in Tongariro and Ruapehu’s region. One is in Whakapapa, and the other is close of Tukino skifieldon the east side of Mt Ruapehu. The elevation of this second area is 1700m so only for the warmest month. These areas, described in North Island Rock Deluxe, worth certainly a visit if you spend a while on north island for their clean rock and their scenic view. In this region, White Falls will offer you a concentration of hard overhanging routes (27 to….) for ticks hunters only! 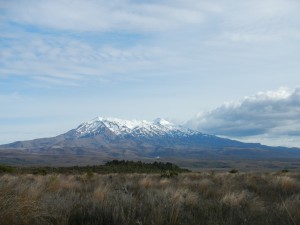 Finally climbing in north island gives you the opportunity to discover the authentic and few visited central north island far from the touristic economy. Routes are certainly less numerous than in Wanaka but they have a strong character!

!!! Last advice before to pack your climbing gear: add to your casual equipement few meters of rope to rebuilt an anchor, a carabiner to lower in case, a belay plate to abseil in stead of lowering on sharp edges, a set of nuts and few cams to complete and extender to reduce the rope drag.

With Google+ plugin by Geoff Janes